In a recent paper we introduced the idea of estimating past richness using the fossil record and assuming that the sampling process follows a Poisson process. We call our approach TRiPS (True Richness estimated using a Poisson Sampling model). In that paper we simulated what we termed a birth-death-fossilize process, which essentially is a birth death process (as in Kendall 1948) coupled with a fossilization scheme. The BD model assumes that at any point in time any lineage has a particular rate of giving rise to new lineages or to go extinct. We just added a third ‘event’ to this roster, that of leaving a fossil. I’ve made an R application (using the package shiny) that will allow anyone to run such a BDF model with a nice user interface. Note that this is not using real data, but just for simulating the process which allows us to investigate under which circumstances (i.e. range of parameter values) our approach breaks down or fails. In the current version of TRiPS distributed below, the species richness estimated using TRiPS is compared to all the 9 estimators used in Anne Chao‘s package SpadeR. It will eventually be extended to allow for running many simulations and will also include the shareholder-quorum-subsampling (SQS) technique of John Alroy. SQS is a relative metric (i.e. not estimating true richness, but relative richness comparable across intervals), so it will only make sense when comparing between simulations.

To run the simulations you need R and a couple of packages;

The first two are easily imported from CRAN, the last you need to download from Chao’s github. If you have devtools run the following code to get SpadeR

After installing SpadeR, shiny and stats4, run the following script;

And hopefully something like the figure below will appear either in a new window or in your browser. 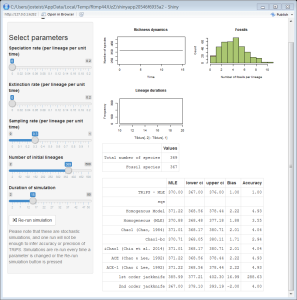 You can then play around. Every time you move one of the parameter sliders, a new simulation is run (or when you press the ‘Rerun simu’ button). In the right panel three figures appear. Top left is the dynamics of species richness throughout the simulation, to the right is the distribution of fossil occurrences across species and at the bottom right is the distribution of lineage durations for the simulations. Below the figures the true richness (total number of species inside the ‘interval’) and the number of species leaving fossils is shown. Then a big table of richness estimates using the simulated ‘fossil record’. On top is our new estimator, TRiPS, and below are the estimators in Chao’s SpadeR package. As I mentioned, sqs is not there yet, but will be implemented soon.

Our approach assumes that there is no species richness dynamics inside an interval (i.e. with speciation and extinction rates set to 0), but this program allows us to look at the robustness of our metric when these assumptions are violated.

If you have comments or ideas, please feel free to drop me a line either by mail or in the fields below.